Quantitative determination of calcium hydroxide in concrete
by Near infrared spectroscopy

Professor of Chemistry, Dept. of Science, Faculty of Engineering and Science
University of Agder, Kristiansand, Norway

Abstract of the talk: Calcium hydroxide is one of the hydration products of Portland cement. The presence of calcium hydroxide and its high alkalinity in concrete helps in corrosion resistance in the embedded steel structures. Enough amount of calcium hydroxide is important for the passivity of the steel structures in concrete. A new method based on the first overtone of the OH stretching of the OH groups attached to calcium hydroxide that gives rise to an absorption at 7082 cm-1 is used in the quantitative determination of calcium hydroxide in cement. Four concrete mixtures with different water / cement ratio were prepared in the laboratory and allowed to harden over 28 days. Small portions of the concrete samples were crushed, ground into fine powder and their NIR spectra were recorded using a Perkin Elmer an NIR spectrum one equipped with a transflectance accessory. A total of 16 scans at a resolution of 16 cm-1 were made on each sample. The 4th derivative profiles of the spectra were used in the quantitative analysis. A set of calibration standards were prepared by using calcium hydroxide and calcium silicate. Their absorptions at 7082 cm-1 were determined by near infrared spectroscopy. A standard calibration plot was established between Ca(OH)2 percentage in calcium silicate and the intensity of the NIR peak at 7082 cm-1. Calcium hydroxide in unknown concrete samples were quantified by using the calibration plot.

The results show that the amount of calcium hydroxide formed during hydration of the cement increases with the increase in water / cement ratio and reaches up to 15 % in the concrete. 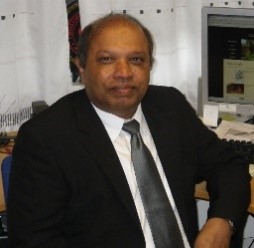 Professor Christy has accumulated an impressive list of scientific achievements during his career. He has published over 100 papers in scientific journals and presented more than 110 lectures at conferences, institutions of higher learning and industrial establishments around the world. Professor Christy has authored several book chapters and reports. He co-authored a book entitled "Modern Fourier transform Infrared Spectroscopy" (A. A. Christy, Elsevier-2001). He has also been a co-editor of a second book "NIR spectroscopy in Food Science and Technology" (Wiley, 2006). Professor Christy has acted also as a referee for some 25 different International Journals across a wide spread of disciplines related to chemistry.

Professor Christy has been included in several biographical directories from 1991 onwards. He has also received several awards such as "Man of the Year 1994", "20th Century Achievement Award (1995)" and several other honours such as "Five hundred leaders of influence in the world".